History of the Property

The Delaware Center for Horticulture nestles in the midst of a large tract of land that over a couple of decades, shifted from private ownership to public ownership as part of Brandywine Park. According to records dating back to 1876, owners included Lewis Bartholomew, a quarryman who lived just across Dupont Street on Shallcross Avenue; and William Poole Bancroft, a member of the Board of Park Commissioners, one of the city’s most ardent and active park advocates. In 1967, a new Department of Parks and Recreation replaced the board.

The story of DCH’s building, as is often true of old buildings, is far from a simple timeline narrative. Although once a rental property home to laboring families of modest means, the structure and land are also linked to the city’s history—first, William Poole Bancroft, a visionary leader in many aspects of park and city planning; next, the site of a Works Progress Administration (WPA) project; then, the source of a vast number of the Department of Parks’ “furnishings;” and now, home to an organization that serves the community in many varied, creative, and valuable ways.

Early in 1935, as part of the Roosevelt Administration’s Back to Work programs that included WPA, city workers laid garage and storage shed foundations and graded the drive down to the basement. A crew of 25 WPA workers — bricklayers, carpenters, concrete workers, and laborers from local relief rolls — started work in August 1935 and finished in December 1935. The project, one of 36 the WPA undertook in the city, cost just under $13,000. Federal funds covered approximately $7,000, and the Board of Park Commissioners contributed the balance. As part of this project, the WPA crew erected the brick wall to create the courtyard and constructed the substantial addition at the southeast corner of the house.

Parks’ personnel knew the site as the “parks storehouse.” The property not only housed maintenance equipment and vehicles but also provided space for mechanical repairs, welding, and, perhaps most surprising, space for casting concrete lampposts, bench ends, roadside bollards, drinking fountains, and birdbaths for use in the parks. 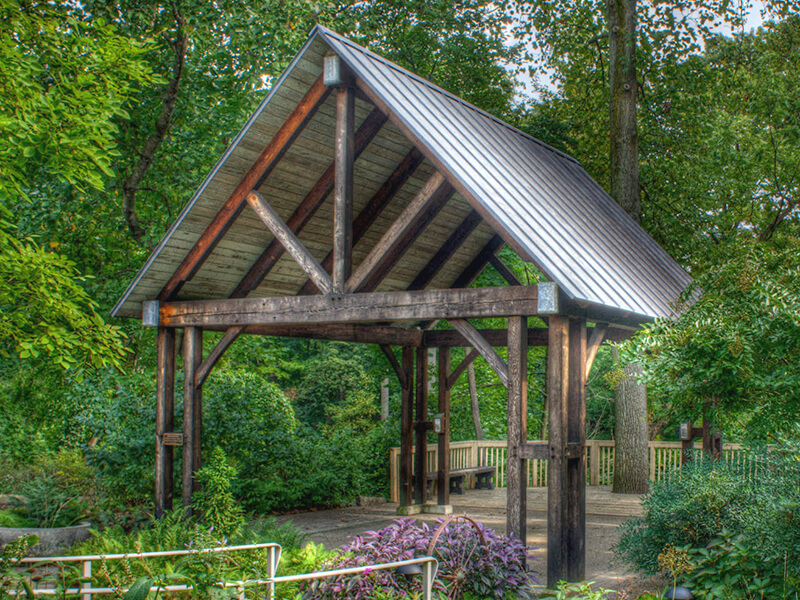 DCH’s Demonstration Garden showcases urban horticulture at its finest, featuring plants that are well-suited to our region, provide year-round interest, and are locally available in garden centers and nurseries. Our garden includes creative re-use of structural materials and artifacts of historic value to Wilmington and serves as the perfect backdrop to any private special event.

The garden is open to the public during daylight hours, and most areas are handicap accessible. For regular updates in your inbox, sign up for our monthly eNewsletter or visit DCH’s Facebook Page to learn more.

The Community Gallery at DCH offers a unique opportunity for regional artists to exhibit work with horticultural or environmental themes that align with DCH’s mission. Recently renovated, our Art Gallery space is in our main building, providing exhibitors prominent visibility to those visiting DCH on a daily basis for workshops, meetings, and local gatherings.

The gallery is open Monday through Friday from 9 a.m. – 5 p.m. and during public evening and weekend events, except on holidays. Art Show Opening receptions are held in conjunction with the Wilmington Art Commission’s Art Loop, usually held the first Friday of each month. 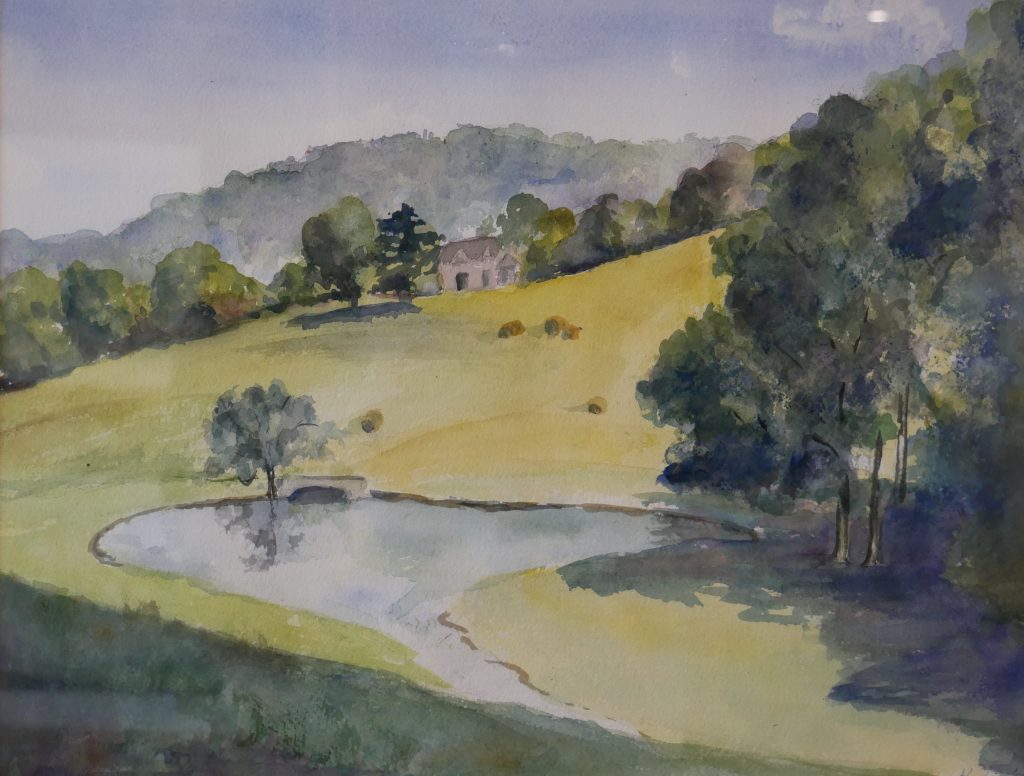 DCH is proud to offer a unique and private art show experience of the late Kitty May’s watercolor paintings thanks to a generous donation from Lloyd and Jeff Bove. All proceeds from the sale of the paintings will benefit DCH’s greening program. Framed and unframed paintings are available. To schedule a private showing with masks and social distancing, please contact Marcia Stephenson at mstephenson@thedch.org or (302) 559-6225. For a virtual tour of the gallery and available paintings, click here.

At DCH, we believe in creating ecologically-sustainable landscapes and gardens that support a healthier environment for people, plants, and pollinators. We also apply that belief to how we operate our building and grounds located in the heart of Wilmington’s Trolley Square. Here are some examples of our mission in action. 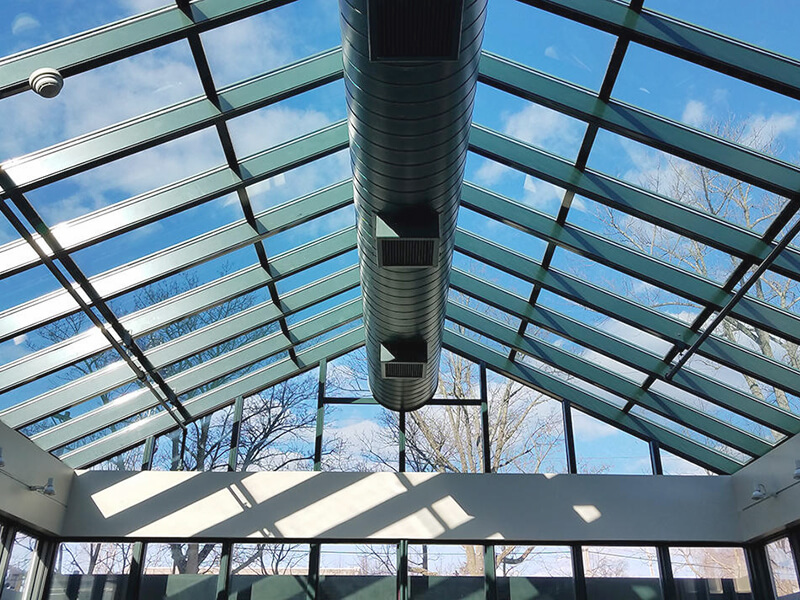 During the 2014 renovation at DCH, all of our roofing surfaces were removed and replaced with R30 value insulation to enhance energy conservation. A new ERV (Energy Recovery Ventilator) system replaced the older HVAC units in the lower level to further reduce heating and cooling loads and improve energy savings. Solar panels were installed on our roof as part of our projected plan to offset the energy needs of the expansion of the building and further reduce our carbon footprint.

Solar cells, also called photovoltaic cells or PV cells, convert sunlight directly into electricity. A typical photovoltaic system employs solar panels with each comprising a number of solar cells, which generate electrical power. Solar PV has specific advantages as an energy source since once it is installed, its operation generates no pollution and no greenhouse gas emissions. A 17kW photovoltaic array was installed during our renovation and went online in June 2016.

Storm water harvesting is the accumulation and storage of rainwater for reuse onsite, rather than allowing it to run off onto street surfaces or directly into local waterways, such as the Brandywine River. DCH’s complete rain harvesting system collects rainwater from a portion of the building’s roof and stores it in our 1,100 gallon cistern tank. Then, harvested rainwater of appropriate quality is distributed for non-potable uses, such as raised vegetable bed irrigation and filling our DCH water truck to water newly-planted trees and plantings throughout Wilmington.

To further our efforts to reduce storm water runoff within the city and down to the Brandywine River, DCH has two (2) interconnected rain gardens at the back of our facility, adjacent to Conaty Park. These gardens connect to an existing storm water management system in Brandywine Park’s Rattlesnake. The rain gardens are based on ecological landscape design in an urban setting and demonstrate the efficacy of native plants’ ability to improve water quality, sustain beneficial pollinators, and educate a variety of audiences about conservation and preservation of ecological bio-diversity.

DCH’s Demonstration Garden, located at the back of our facility, aims to showcase urban horticulture at its best and features plants that are native and well-suited to our microclimates, provide year-round interest, and are locally available in garden centers and nurseries. The renovated garden continues to include creative re-use of structural materials and artifacts of historic value to Wilmington and features a newly restored garden gate, which was installed in 2018. The garden is designed and maintained by DCH staff and volunteers.

The base of the Infinity Green Roof is comprised of decking with a drainage layer, planted media (soil), and hardscape pavers. The total Green Roof area is 1,380 sq. ft., minus the IPE decking (464 sq. ft.). There is approximately 916 sq. ft. of planted area with soil media, which includes the hardscaping as it sits above filtration layers and rock wool. The surface was planted in 2017 with native vegetation, creating an oasis that overlooks the Demonstration Garden and Pavilion, Brandywine Park, and Conaty Park. This space provides a great outdoor setting for cocktail hours and special events.

This website uses cookies to improve your experience while you navigate through the website. Out of these cookies, the cookies that are categorized as necessary are stored on your browser as they are essential for the working of basic functionalities of the website. We also use third-party cookies that help us analyze and understand how you use this website. These cookies will be stored in your browser only with your consent. You also have the option to opt-out of these cookies. But opting out of some of these cookies may have an effect on your browsing experience.
Necessary Always Enabled
Necessary cookies are absolutely essential for the website to function properly. This category only includes cookies that ensures basic functionalities and security features of the website. These cookies do not store any personal information.
Non-necessary
Any cookies that may not be particularly necessary for the website to function and is used specifically to collect user personal data via analytics, ads, other embedded contents are termed as non-necessary cookies. It is mandatory to procure user consent prior to running these cookies on your website.
SAVE & ACCEPT